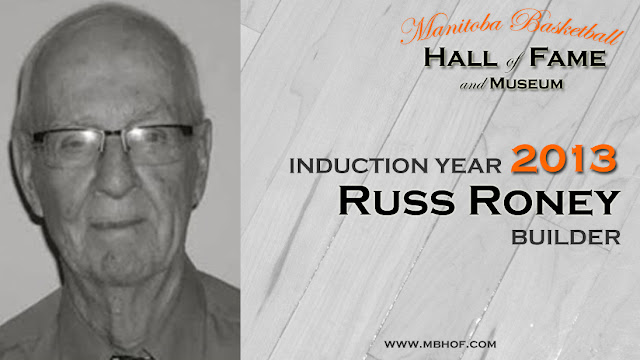 It is with great sadness that the Manitoba Basketball Hall of Fame and Basketball Manitoba share the news of the passing of Hall of Fame member (Class of '13) Russ Roney on June 1, 2017.  Russ was a basketball legend in the Westman region. His years of involvement as a player, coach, administrator, volunteer, and official began in 1955 when he coached the Brandon Y Queens.

In addition to this, he acted as the Westman officials assignor and head clinician from 1968 to 1989. He officiated at many of the biggest CIAU/CIS and high school games in and around Brandon for many years.

In 1984 he was presented with the prestigious J.A. 'Wink' Willox Award of Merit for this longtime contribution to basketball officiating in Canada. In 1996 he was recognized by the Manitoba High School Athletics Association (MHSAA) with a Certificate of Recognition for his contributions to high school sport.

Russ has also been very active in the Mike Spack Youth League in Brandon, the Brandon YMCA, and the Royal Canadian Legion.  Russ was inducted into the Manitoba Basketball Hall of Fame as a Builder in 2013.

Our thoughts are with the Roney family.