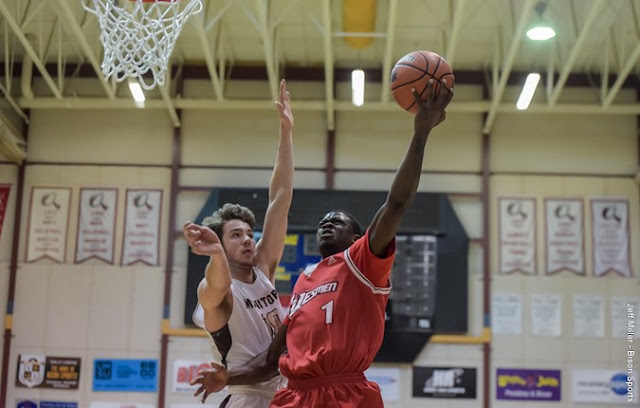 Bison rookie James Wagner is among players at 2017 U19 men's basketball national team open tryout at Humber College - Lakeshore Campus (Etobicoke, ON) on Sunday, June 11. In addition, Bison men's basketball head coach Kirby Schepp is guest coach at the camp and now in his eighth summer with the national program.

From Canada Basketball: National team coaches will assess players for potential inclusion in the team's selection camp, which will immediately follow the open tryout. Tryouts are open to all Canadian male athletes born January 1, 1998 or later who have a valid Canadian passport. The final U19 Team will travel to Cairo, Egypt for the FIBA U19 Basketball World Cup from July 1-9, 2017.

Wagner, 18, had a breakout season in his first year with the Herd at the forward position as he was named to the 2016-17 Canada West All-Rookie Team. The Winnipeg native was third in Canada West and led the team at 56.8% field goal percentage and was fifth in team scoring with 7.5 points per game while playing in all 20 conference games in 2016-17. In a veteran laden squad, Wagner averaged 17.9 minutes per game (sixth on team) and the 6'7", 200 lbs. forward grabbed 3.6 rebounds (fourth on team) and tied for second with 0.4 blocks per game. In the 2017 Canada West playoffs, Wagner was fifth on the team with 7.3 point per game while third with 51.4 field goal percentage shooting in 18.0 minutes per playoff game.

Schepp, 41, completed his eighth season with the Bisons in 2016-17 and led the program to one of their most successful seasons in recent years by earning a first U SPORTS national championship appearance for the program since the 1985-86 season (counting regional championship). Schepp was at the helm as Manitoba were 2017 Canada West silver medallist after a 5-1 Canada West playoff record when they defeated #2 ranked UBC in a best-of-three road series and then beat #5 Calgary to advance to conference final plus clinch a berth into Nationals. Manitoba also had an impressive second half of the conference season as they won ten of the last 12 consecutive regular season games (13 out of 15 counting non-conference contests) to finish 12-8 conference regular season record during the 2016-17 campaign.

Bison Notes: Wagner was part of 2016 U18 men's basketball Canadian national team that competed in U18 FIBA Americas in Chile from July 19-23 and won a silver medal.