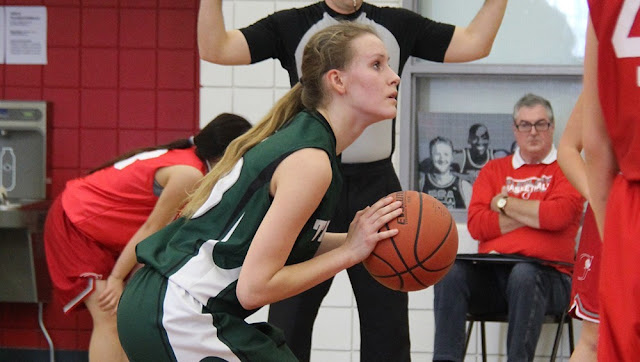 Brandon University Women's Basketball Head Coach Novell Thomas has announced the signing of Vincent Massey's Jessica Hartog for the 2017-18 season.  The 5-foot-10 guard from Winnipeg is the second recruit to sign with the BU women's basketball team for the 2017-18 season, joining Saskatchewan standout Chelsea Misskey.

"It is so surreal. I could not imagine myself playing university basketball and now that dream is a reality," said Hartog.

Brandon coach Novell Thomas has kept track of Hartog's steady climb up the ladder of success. Last spring, a strong showing at the Junior Bobcats Club Tournament cemented his decision that Hartog has the tools to be a solid contributor.

"I really saw her in a different light," said Thomas. "Her skill set, her ability to shoot, drive and distribute the ball was intriguing. We took a closer look at her after that and things fell into place."

The basketball spotlight has shone on Hartog throughout her high school career. The first major accomplishment was leading Sargent Park to a Basketball Manitoba Junior Varsity Championship in grade nine.

Hartog then took her talents to new heights as a member of the Vincent Massey Trojans. In 2015, she helped the team to a runner-up finish at the 4A provincial JV championship where she was recognized as an all-star.

Back-to-back silver medals in 2016 and 2017 at the 4A senior provincials were stepping stones to cap off her time as a Trojan.

"It has really pushed me to get to where I need to be," added Hartog. "Losing those games was a valuable lesson to keep growing as a player and go one more step to achieve my goals."

As a member of Team Manitoba, Hartog helped her squad to a silver medal at the 2015 Western Canada Summer Games.

She built on her basketball IQ by reaching the national stage and this summer she will gain global knowledge for the game.

Hartog is set to represent Canada at the prestigious Maccabiah Games in July in Israel. She will be among 9,000 athletes from 78 countries competing in the international Jewish multi-sport event. It is the third largest sporting event in the world, behind the Summer Olympics and the FISU World University Games.

"It is a huge opportunity and the high pressure games will benefit me moving ahead. I am really proud and it is a really important moment in my life."

Donning a Bobcat jersey is another important moment for Hartog. She joins the BU family following a historic season for the Bobcats where they reached the Canada West playoffs for the first time.

The timing of Hartog's arrival couldn't be better.

"Her offensive skill set is exciting and because of that she will battle for minutes in her first year," added Thomas. "We lose a lot of players due to graduation after next season, so it is a great opportunity for her to continue to develop and grow."

"I feel like BU and I will be a perfect fit," said Hartog. "I like smaller universities, so when this opportunity came up it was a no brainer to become a Bobcat."