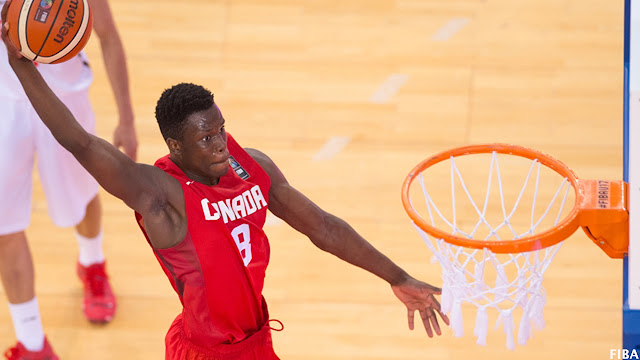 By Taylor Allen - The Projector

There’s a new face of basketball in Manitoba, and his name is Emmanuel Akot.

On March 8, Akot announced his commitment to the University of Arizona Wildcats. He’ll be joining the team in 2019.

“I’m going to Arizona and I picked them because when I went there, it was a family atmosphere,” said Akot in an interview with Scout.com.

Arizona is one of the most highly respected basketball programs in the NCAA. They were ranked fourth in the nation heading into this year’s March Madness tournament. Currently, there are 12 Wildcat alumni playing in the NBA—like Aaron Gordon, Andre Iguodala, and Jason Terry.

“They put players in the NBA and that’s where I want to go and that’s why I’m picking Arizona,” said Akot to Scout. com. The small forward is listed as 6’8’’ and 195 pounds.

Akot, 18, will become the fourth Manitoban male to play NCAA Division I basketball. Todd MacCulloch, the only Manitoban to ever play in the NBA, played for the Washington Huskies from 1995-1999. Dan Becker played for the Colorado Buffaloes from 1986-1989 before playing professionally overseas. Cam Hornby was the last Manitoban to play Division I hoops—he played briefly for the South Dakota State Jackrabbits in 2006.

Chiranjit Goswami, who coached Akot from 2012-2015 with the Winnipeg Wolves, is not surprised to see Akot become the next Manitoban to play down south. The first time Goswami saw Akot play, he knew he was something special.