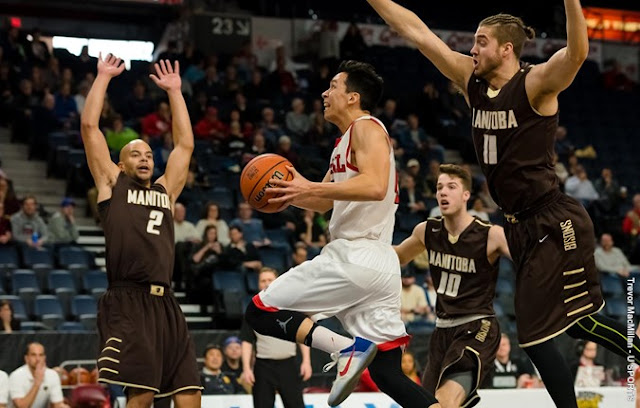 The Manitoba Bisons (regular season: 12-8; playoffs: 5-2) were defeated in men's basketball by #6 McGill Redmen (regular season: 13-3; playoffs: 3-0) by a 63-53 score in the Quarter-final game at the 2017 ArcelorMittal Dofasco U SPORTS Final 8 held at the Scotiabank Centre in Halifax, N.S., hosted by Dalhousie University on Thursday, March 9.

The Bisons entered the game as the number six seed (after not being ranked in the Top 10 all season) while McGill was the number three seed.

Manitoba were stymied throughout the championship game as McGill, the RSEQ champions, clamped down on the high-octane Bison offence and relegated them to almost 30 points behind their conference average of 83 points per game this season. 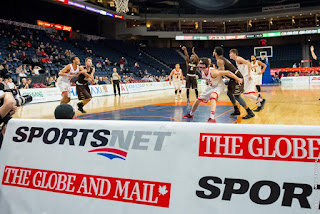 "I am proud of the way the guys competed. Not only today but the entire season," commented Bison men's basketball Kirby Schepp after the tough loss. "We did not execute the way we wanted to today which comes down to coaching."

Manitoba started out strong to begin the game with a quick 4-0 lead but McGill responded with a 9-0 run and the Bisons never regained the lead.

During the first 20 minutes of action, The Bisons were down by as many as ten points and closed the gap to 27-25 after a fifth year forward Brett Jewell layup with 2:38 left in the second.

In the second half, the Herd scratched and clawed their way back into the contest during the third quarter as both teams had lots of trouble scoring and Manitoba looked for some much needed momentum. After three, McGill led 46-38 with the Bisons only able to score eight points in ten minutes.

Manitoba needed a comeback but could not muster enough shots to go down during this game. McGill played strong defence but numerous looks just did not fall for the Bisons in the fourth. The Canada West finalist could only get the Redmen lead down to seven points and never could sustain a long scoring run to knock away the disadvantage on the scoreboard before the end and a final score of 63-53.

Both teams had a tough time shooting as Manitoba held McGill to 36.5% field goal shooting but only managed 40% from the field. The Redmen dominated the offensive rebounds by a wide 17-4 margin and overall was 47-34 in total rebounds. McGill went to the foul line 22 times as opposed to only ten by the Bisons. Another telling stat was fast break points as Manitoba only had two after being only one of the fastest teams in the conference this season.

Individually, Manitoba was led in scoring by Basi and Omoerah with 13 points each followed by Alleyn with nine points and Bonhomme and Jewell with five each. Omoerah was close to a double-double with nine boards and Bonhomme notched six rebounds. Omoerah was team leader with four assists.

McGill had Jenning Leung and Francois Bourque leading the winning side with 13 points a piece. Bourque also had a double-double with a game-high 15 boards while Dele Ogundokun (9 points), Noah Daoust (8) and Sebastian Beckett (8) all contributed in scoring.

McGill's Leung and Manitoba's Omoerah were named player of the game for both teams.

Schepp continued, "McGill is a fantastic defensive team and they showed it today. We will try to finish the season on high note tomorrow versus Calgary and on the consolation side."

McGill will play defending six-time U SPORTS champion Carleton Ravens in one of the semifinal games on Saturday, March 11.

For Manitoba, it is a rematch of the Canada West semifinal this year, as they will face the Calgary Dinos on Friday, March 11 at 4 p.m. CT in the consolation semifinal.