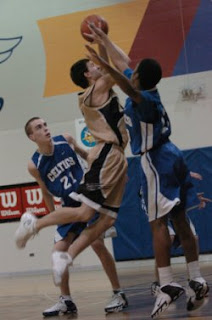 The MHSAA has announced a scholarship opportunity for male basketball players at the high school level.  Garett Lee Sidor of Windsor Park Collegiate, was an outstanding young student athlete. His life tragically ended on May 13, 2007. Garett participated in many sports, including hockey, volleyball and basketball. He was selected as an All-Star in the 2007 Provincial “AAA” Basketball Championships which his Windsor Park Royals captured. He was also named to the All Manitoba Team.

Garett’s friends and Family have set a scholarship to be awarded to a male high school basketball player who displays sportsmanship, leadership and outstanding ability. A scholarship in the amount of $750.00 will be awarded annually. Nominations will be taken by the Manitoba High Schools Athletic Association and scholarship funds will be administered through the Garett Lee Sidor Scholarship Fund at the Winnipeg Foundation. Contributions to this fund may be made by contacting the Winnipeg Foundation.

More information can be found on the MHSAA website.