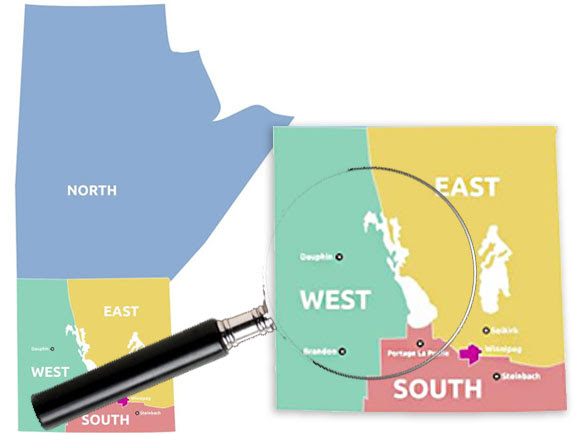 To provide the best services possible to Manitobans, Sport Manitoba has restructured the provincial regional zones it recognizes and their boundaries.  Based on feedback collected during its 2014 Rural Review, Sport Manitoba evaluated its regional staffing structure to better meet the needs of regional sport development.  It was clear that more direct programming for coaches and athletes was the biggest area of support review participants suggested.

To date 2 of the 4 new staff positions have been hired. The third position is currently advertised. Click here for job posting. The fourth coordinator is planned to be hired in the 2018/19 fiscal year.

The new regions recognized by Sport Manitoba will be divided as follows:

The East Region is now defined as the former Interlake region and the part of the former Eastman region that is north of #1 highway .

The West Region amalgamates the Westman and Parkland regions with the following amendments:

The South Region assumes the Central Region boundaries with the following amendments:

The Winnipeg Region remains the same as the previous Winnipeg regional boundaries (No boundary changes, city of Winnipeg limits, not Perimeter HWY).


Any questions regarding the new regions or funding should be directed to the corresponding office.

We built an interactive map using PDF layers. For it to function fully you must download/save the PDF to your computer. Click here for tips on using layers in PDF.

Who do I talk to about funding?
Please contact your regional office.

How do I know what region I'm in?
Contact Sport Manitoba (regional offices listed above). Your previous regional office should be your first point of contact.

What team am I on?
Teams will be defined by region. Some regions may have more than one team in certain sports based on the strength of that sport program in the region. Check with your Provincial Sport Organization.

Where will my try-outs be?
The next PowerSmart Manitoba Games for basketball will be offered at the 16U age level (born in 2004) for males and females and be in the summer of 2020.  Regional tryouts will occur in the spring of 2020 and a call for coaches will be out in the spring of 2019.  As of now, there will be 2 teams created in the West, South and Winnipeg regions and 1 in each of the North and East regions for a total of 8 teams formed per gender.

Who do I contact for funding?
KidSport now has two zones; Rural and Winnipeg.

If funds are raised in a specific region, where do they go?
All funds raised will stay within the region they are raised to benefit the residents of that region.

How do the new regions affect PSO teams and regions?
Basketball Manitoba will follow these new regional lines when managing the basketball portion of the Manitoba Games and other regionally tied or defined programming.