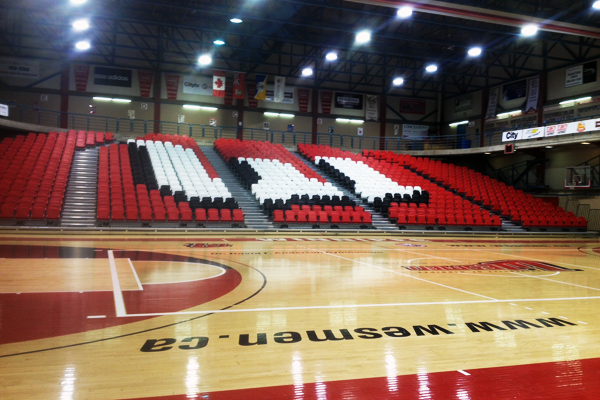 Basketball Manitoba is pleased to share the news that the University of Winnipeg Duckworth Centre is going to be receiving a nice upgrade to its floor this coming spring. The new renovation will include a brand new hardwood floor on centre court with some major repairs made to the east and west courts.  The work will also see the basketball lines all upgraded to the current FIBA court markings. The facility has been seeing some other recent upgrades over the past couple of years including brand-new sets of bleachers, improved and energy efficient gym lighting, a new paint job and a new walking/running track.  New scoreboard options are also being explored. These upgrades reflect the ongoing commitment by the University of Winnipeg to provide a high quality facility for all users.

The Duckworth Centre has seen many significant basketball events in its history including the famous 1993 Wesmen Women's 88 game winning streak game, the 1990 Western Canada Summer Games, the 2004 & 2005 CIS Women's National Championships, 2016 Canada Basketball National Championships, countless provincial high school championships and has hosted 32 of the 50 Wesmen Classic tournaments.  The very first games played in the Winnipeg Minor Basketball Association were also played in the Duckworth gym in the fall of 1997.  There have also been a number of NBA practices involving the Golden State Warriors, Minnesota Timberwolves and Atlanta Hawks back in the 1990's when they were in Winnipeg playing exhibition games.  Add the countless basketball camps, senior league games, coaches clinics and other special events, the facility is one of the anchor basketball facilities in Manitoba.

The renovations are scheduled to begin later this spring and are expected to be completed by early summer and will host basketball in week 1 of the 2017 Canada Games.