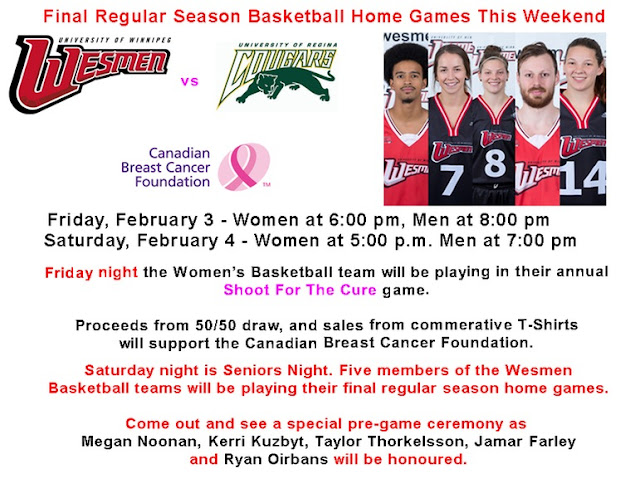 The 2016-17 basketball regular season home schedules will come to close this weekend against the Regina Cougars. On Saturday night it will be Seniors Night. Women's players Megan Noonan, Kerri Kuzbyt and Taylor Thorkelsson (all form members of Team Manitoba) along with Men's players Jamar Farley and Ryan Oirbans will be honoured in pre-game ceremonies before their respective games. The women's team (15-1, 1st Canada West) is coming off a road sweep against MacEwan, while the men's team (10-6, 6th Canada West) is coming off a weekend split against the Griffins. The Regina Cougars women's team will see the return of Kyanna and Kyia Giles, members of Team Manitoba for the past 5 years.  Both players were part of the 2014 National Championship 17U Female team of which Wesmen senior out Kerri Kuzbyt was an assistant coache with Wesmen coaches Tanya McKay and Tami Pennell.

A special Basketball Alumni Celebration will be held on the weekend of Friday February 3rd & Saturday February 4th as the Wesmen take on the Regina Cougars.  As a special thank you, All Wesmen Alumni and their families will receive FREE admission to the games. (A special Alumni entrance will be set up on the second floor).  The Alumni Celebration will begin on Friday, February 3rd  as the Wesmen teams take on the Cougars. Women’s Games begin at 6:00 p.m. with the Men playing at 8:00pm.  Come out to the Dr. David F. Anderson Gymnasium at the Duckworth Centre and watch the action.

On Saturday, February 4th, the Wesmen Basketball teams are back on the floor playing at 5:00 p.m. and 7:00pm.  On both nights, a special Alumni gathering area will be set up on the second floor of the Duckworth Centre. Light food and drink will be available.