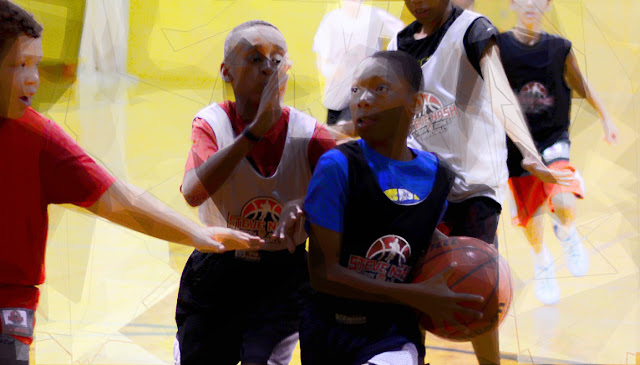 It seems like every time we’re in the gym, working with young players to perform different movements, skills, and activities, it only reminds us how much the abilities of players vary. It can be a real challenge to meet the needs of each player without leaving others behind.


Thankfully, we have the Long-Term Athlete Development (LTAD) Model to fall back on.
A brilliant and thorough model of athlete development, and the basis for all SNYB curriculum and training philosophy, the LTAD Model and its stages of development provide a training blueprint for coaches.
We won’t cover the entire model here today, instead focusing on the nuances in coaching for the FUNdamentals and Learn-to-Train stages of development – the bread and butter of youth sports.

The FUNdamentals Stage (ages 6-9) is often a child’s introduction to sport. For many, this will even be their first time playing basketball – surely the best decision of their young lives. For these players, the priority needs to be on having fun and developing a love for basketball, followed by the ABCs of movement: agility, balance, coordination, and speed.
Physically, kids develop their athletic “foundation” during this stage. Their ABCs, strength, and other physical characteristics improve naturally as they learn how to move with and use their bodies. Use games that allow athletes to develop their fundamental movements without even knowing it – so kids are focused on having fun.
This is similar from a basketball perspective, where there is less emphasis on skill technique and more focus on experimentation and familiarization with the sport. Activities like tennis ball dribbling or ball slaps and tosses help players become comfortable with the ball in their hands – instead of a focus on form, it is best to allow kids to discover skills for themselves.
Together, these concepts for movement skills and basketball skills form the athletic foundation athletes will need later on.
But the FUNdamentals is also the beginning of emotional growth, and coaches should consider the kinds of activities used. For example, modified games (rather than traditional drills) allow for maximum participation while de-emphasizing individual performance. Group games often force a ton of interaction and require different skills, while providing challenges (and confidence building) through both team and individual competition.
Psychologically, most kids simply aren’t mature enough for intense mental preparation or to care much about winning. Instead, practices should be welcoming and positive, with games and scrimmages focused on applying new skills instead of on the winners and losers.
As summary we will draw directly from the National Coaching Certification Program (NCCP) literature, which presents a rough breakdown of the skill focus at the FUNdamentals stage:

By the Learn-to-Train Stage (ages 8-11 for girls, 9-12 for boys), kids have likely developed a fondness for a sport or two. We hope it’s basketball, but we’re pretty biased. More importantly, they are physically and mentally mature enough to emphasize basic sport-specific training.
Learn-to-Train is the major skill development stage for athletes. The goal is to build on the ABCs learned during the FUNdamentals, and apply them through footwork, passing, dribbling, and shooting drills that are an indispensable part of basketball development.
But it’s important to note that the fundamental movements are still key. Before too many team concepts are introduced, or if players are struggling with progressions, ensure the fundamentals are strong. When in doubt, fall back on drills like Partner Passing, Frog Form Shooting, and the Maravich Series – all staple drills that reinforce the basic mechanics behind passing, shooting, and dribbling respectively.
But with their newfound size and strength and understanding of the game, players can be more physical and intensive in activities (like full court relays or 3X3 scrimmages) and more team concepts may be introduced (like cutting and defense).
At this stage we want to help players refine their basketball skills before they enter puberty and the Train-to-Train stage. Although practices will become more complex, the focus should still be on fun and fundamentals first. No kid “peaks” at 12-years-old, so winning simply isn’t a priority.
So again we go back to the NCCP guidelines for a practice, with a rough breakdown of skill focus:

We want sport to be fun first. We also want to train athletes appropriately according to their physical and psychological maturation. Thanks to the experts and research that contributed to the LTAD Model, we can all be confident in developing athletes with life-long involvement in sport.
But when it’s all said and done, it’s coaches like you who make that happen.