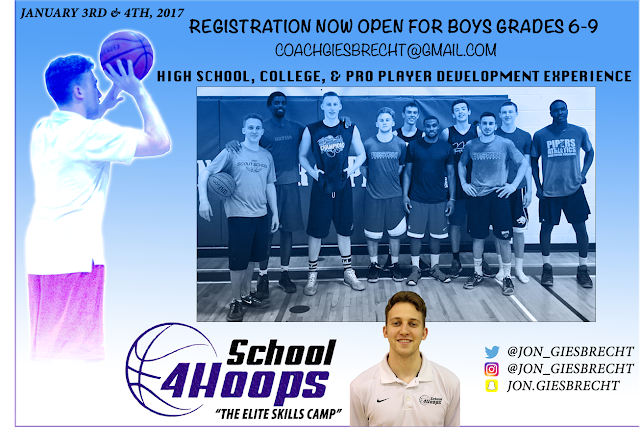 Space Filling Up: Local basketball coach Jon Giesbrecht has announced he will be hosting his annual School 4 Hoops Elite Skills Camp which is open to boys currently in grades 6-9 on January 3 & 4, 3017 in Winnipeg.  Cost to register for the 2 day camp is $75 a person and will run from 12:30 - 4:00 pm each day.

School 4 Hoops is back❗️I am leading the "Elite Skills Camp" for Boys Grades 6 to 9 January 3rd and 4th. Link for registration can be found in my bio. Payment can either be found on Basketball Manitoba's Website (Tomorrow) or I can be contacted directly. This camp promises to be the best one yet 💪 @basketballmb - - - #BasketballCamp #Winnipeg #Manitoba #YouthSports #BasketballTraining #HolidayCamp
A video posted by Jon Giesbrecht (@jon.giesbrecht) on Dec 6, 2016 at 3:31pm PST


Payment can be made through PayPal below or paid by cash or cheque.

Coach Giesbrecht’s testimonials and recommendations from friends, colleagues and mentors:

Coach Jon, I wish I was 15 years old so I could attend your basketball camp. I would receive excellent instruction and guidance from you.
George Raveling (Naismith Basketball Hall of Fame Inductee, Current International Director of Nike Basketball, Former Team USA Men’s Assistant Coach, Former Division 1 Head Coach of the University of Southern California, University of Iowa & Washington State University)


Coach Giesbrecht is one of the brightest young coaches in our country.  His ability to break down complex concepts and make them simple for young players is unprecedented.  Anyone who has the opportunity to spend time in the gym with him will benefit greatly regardless of age or ability, he will flat out improve your game.
Mike Raimbault (Current University of Winnipeg Head Men’s Basketball Coach)


Jon is one of the best skill development coaches I have worked with. His dedication to the game and his commitment to developing new ideas, training techniques and methods has put him on the cutting edge of basketball skills training.
Kirby Schepp (Current University of Manitoba Head Men’s Basketball Coach, Current Assistant Coach Canadian Junior National Team)

I've had the opportunity to watch Jon grow and develop into one of Manitoba's best young coaches over the past 5+ years and I would highly recommend his camps to any athletes seeking improvement and an opportunity to learn new skills and concepts. Jon does an exceptional job of teaching every little detail about fundamental skills and basketball-specific concepts. One of the many highlights in his camp are the decision-making training drills and breakdowns which enhance athlete learning and understanding of higher level concepts. The skills and concepts taught are always age appropriate and individually catered to each athlete in attendance.
Scott Kirkpatrick (Current Red River College Head Men’s Basketball Coach, Former 15U & 17U Manitoba Male Provincial Head Coach)

Jon has an outstanding ability to breakdown skills and concepts where the athlete comes away with a great understanding. The energy and thought Jon puts into skill development is second to none. His passion and dedication creates a learning environment that is an excellent experience.
Dan Becker (Current Basketball Manitoba Technical Director, Current Centre of Performance Lead Instructor, Former 17U Male Provincial Coach, Former University Head and Assistant Coach, Former Division 1 and Professional Player)

Jon always brings focus and passion to his drills and practices. I played college basketball and coached in college however, when I do workouts with Jon I am always being challenged with new drills that I've never done before.
Darcy Coss (Current WMBA Executive Director, 3X3 Acceleration Performance, Former 15U Male Provincial Coach, Former University of Manitoba Bison Player, Former Head Coach at Canadian Mennonite University)

In the past few years Jon has shown that he is a well-rounded coach who is wise beyond his age with his skill development and basketball tactics. Whether you’re a high school or college player, attending a camp run by Jon Giesbrecht will certainly benefit your overall development!
Nick Lother (Current 15U Male Provincial Coach, Basketball Manitoba Centre of Performance Coach, Vincent Massey Varsity Boys’ Head Coach, University of Winnipeg Men’s Assistant Coach, Former University of Winnipeg Wesmen Player, Former Professional Player)

Coach Giesbrecht is one of the top coaches and skill trainers in Manitoba.  His skill work and ability to work with film is the best I have seen in a long time. Over the years, he has proven this by developing and working with some of the best players to come out of this province and winning three provincial championships along the way.  His camps are excellent and every player goes away with a better understanding of what advanced skill development looks like.
Spiros Kavadas (Current John Taylor Collegiate Varsity Boys’ Head Coach, Former 15U & 17U Male Provincial Coach)

Having both coached with and against Jon I can attest to his knowledge of basketball.   Basketball is Jon’s passion and he stays up to date on the best training and skill development techniques and drills. Players get better by working with Jon. If you are trying to become a better basketball player this off-season I would highly recommend working with Coach Giesbrecht.
Jon Lundgren (Current Oak Park High School Head Coach, Former 15U Male Provincial Coach Former University of Manitoba Bison Player)

Coach Jon is a dedicated and hardworking coach who is willing to go the extra mile in order to help his athletes improve. He pinpointed my weaknesses and gave me targeted trainings in order to improve, improving facets of my game most coaches wouldn’t think about. Rather than focusing on your growth in your position he focuses on your growth as a player; which helps in the long term. I thoroughly enjoyed his training sessions and in the months I worked with him saw great improvements in my game; his attention to detail in video work and his dedication shows through in every aspect of his coaching. If you want to become a better basketball player and not just a better player for your team, training with Coach Jon is the way to go.
Ryan Oirbans (Current University of Winnipeg Wesmen Player)

Jon is one of the best and hardest working skill development coaches out there, he's always coming up with new and creative ways to get his players better. He pushes players out of their comfort zones and every time you leave a workout you really feel like you got better.
Justus Alleyn (Current University of Manitoba Bison Player, Former 17U Provincial Player, Ranked #1 High School Player of 2013 Class)