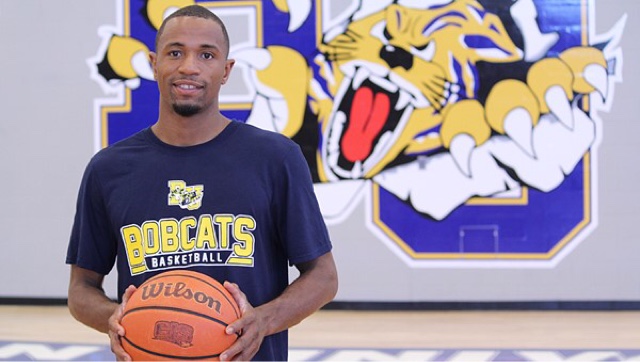 An American import is bringing his talented skills set to the Brandon University men's basketball team this fall.
Middletown, New York product Tyvon Cooper has committed to the Bobcats for the 2016-2017 Canadian Interuniversity Sport (CIS) season. He will have three years left of eligibility after spending two seasons with the Orange County Community College Colts. "I am very excited to come to Brandon and I am excited to help get some wins," said Cooper. "I come from a small town and before being in contact with coach Cheung I had never heard of Brandon, but after learning about the community and campus, I am excited for the opportunity to play at Brandon University." South of the border in 2015-2016, Cooper was chosen to the National Junior College Athletic Association Division II All-American Team. The 6-foot, 175-pound guard was fourth in the nation in scoring at 23.7 points per-game and finished eighth in free throw percentage at 85 percent. The Colts got to the playoffs for the first time in three years last season thanks in large part to Cooper's contributions. He was tops on the team in scoring, free throws, rebounds, steals, field goals made and three point field goals made. Cooper also etched his name in the school record books at Orange County last year. Beyond the arc, his 88 three pointers were just shy of the school's single season record of 91 and his points per-game total placed him seventh on the all-time single season scoring average list. Brandon coach Gil Cheung is confident that Cooper can be a game-changer for the Bobcats with his versatility and leadership skills. "I think he can be very good in the Canada West conference and the CIS in general. We are very fortunate to have him. His maturity and leadership will go a long way for us," said Cheung. "We are looking forward to having another dynamic scorer on our team and he brings another set of skills to our program." The decision to make Brandon his next basketball destination was two-fold for Cooper as he is determined to succeed in sport and with his studies. The Bobcats believe he can deliver on both fronts. "He is very motivated in the classroom and that is where he found a great fit in coming here," added Cheung. "He wants to excel academically and wants to help us improve in the process." "I can bring energy on the court and positivity off the court as I love to get involved with the community," said Cooper. "Not too many people get the chance to leave the country and it is a great opportunity. I have a son back home that looks up to me. I am excited to do big things and be a good role model for him." The Bobcats' recruiting class now stands at four with Cooper coming on board. Veteran Josh Bell of Mississauga, Ont. and high school standouts Kobyn Jopp of Calgary and hometown product Riley Schaus are the other newcomers to the program.