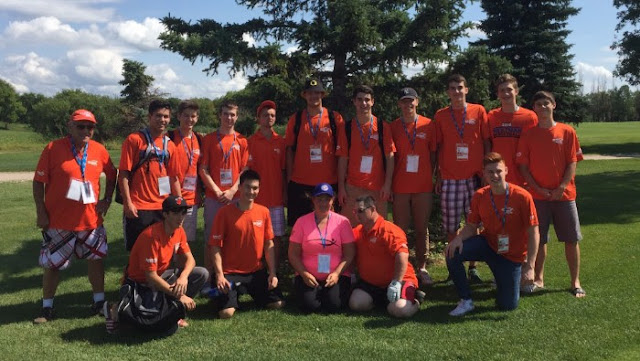 With so much competition packed into just a couple of days, it would be easy to get into the routine of sleep, eat, compete, and not get a chance to enjoy the team spirit and camaraderie that comes with the Games and being a part of your greater regional teams.

The Westman Men's Basketball team, tossed that mentality to the side to support their amazing Special Olympic Golf team during their competition Tuesday afternoon. Every member of the team walked at least four holes with the golfers, and cheered for every shot that was made by any athlete, regardless of team. This type of sportsmanship is what the Games are all about! Way to go boys! 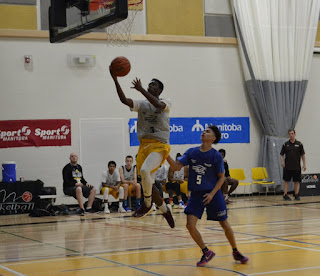 Defense wins games, but having some offensive prowess doesn’t hurt either. Winnipeg Gold’s Tiernan Marshall showed that he knows how to work all positions, exploding for 31 points in a nail-biting win against same-town rival Winnipeg Blue. Things were looking bleak for Winnipeg Gold, being down 51-39 at the half, but they collected themselves at the half to break out with a 16-2 run to begin the third quarter.

The Winnipeg Blue defense was not to be ignored, who kept pace with Winnipeg Gold throughout the remainder of the third and fourth quarter. With the lead bouncing back and forth, it was Winnipeg Gold’s composure with free throws down the line that gave them the boost they needed, going 5 for 7 as a team to give them the 95-90 win. Winnipeg Gold’s Noah Dornn went 3 for 4 on free throws in the fourth quarter, and had 23 points overall in the game. Leading scorers for Winnipeg Blue was Kyle Lai, with 16 points, followed by Shawn Maranan with 15 points.

In the Smart Pool, Eastman easily handled the Norman team by a score of 90-58. DeMar Kraus had 20 points for the Eastman, and Matthew Kaspick poured in 14 points for Norman.

To end off the round-robin, Parkland took down Interlake 69-39. Joshua Marshall topped with 22 points for Parkland and Carl LeBlanc had 14 points for Interlake.