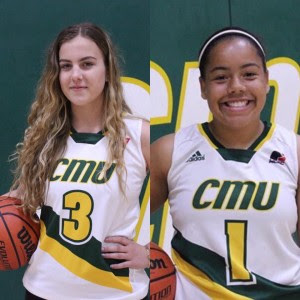 Kelvin High School's, Remy Dickson is a 5'9 wing who helped the Clippers to a third place finish in their zone in 2016 and was selected to represent Winnipeg School Division 1 in the annual All-star game versus a selected group from the KPAC division. Dickson averaged 20 points per game in her final high school season but will be counted on for more than scoring by the Blazers who consider her to be a top defender.

"Remy has lots of potential and works very hard to get better," said Di Curzio, "as much as she is a great scorer, she is a very solid defender who pressures the ball and can be a very physical player."

Dickson was selected as the winner of the Kelvin Clippers Coach's Award over three consectutive years of her high school career leading to 2016.

Fellow Spartan club member, Jade Sharpe is known to be a quick defensive player as well, as the Blazers offseason continues to draw in recruits who excel on both ends of the court. A 5'4 guard, Sharpe was a defensive leader on her John Taylor Collegiate high school team and was selected as a 2016 Manitoba High School 'AAAA' Girls Graduating All-Star. She was also selected Player of the Game at the Pembina Trails Classic in her final high school season.

"Jade is a really hard-nosed player." said Di Curzio, "she defends relentlessly and on the offensive end of the court, she can put the ball on the floor and attack the basket very well."

Both Dickson and Sharpe are looking forward to being a part of the inaugural season in the Northern Intercollegiate Athletic Conferennce (NIAC) that CMU Athletics recently announced membership in for the sport of basketball. The Blazers will continue to belong the the MCAC as well, but will strengthen the competitiveness of their overall schedule by adding the seven-team conference south of the border to their 2016-17 offerings.