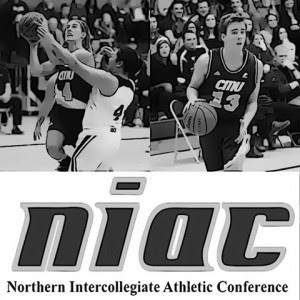 The CMU Blazers Men's and Women's Basketball teams have announced that they will be adding a new affiliation to their conference commitments and schedule for 2016-17. The CMU Blazers will be competing in both their provincial college and university conference, the MCAC, and will begin play in the Northern Intercollegiate Athletic Conference (NIAC).

"This is a big deal for us," said CMU Director of Athletics, Russell Willms, "we are really happy to offer this opportunity to enhance our schedule. It provides us an opportunity to host a variety of additional home games on campus this season as well."

CMU is the seventh member of NIAC, a conference independent of the NCAA, that features teams from colleges in the Northern Midwest US states. The Blazers are scheduled to play twelve regular season games in the new affiliation that they will add to their MCAC basketball schedule that provides an equal number of regular season games in Manitoba. They will also compete for two separate conference Championships in late February, north and south of the border.

"The MCAC continues to develop, in terms of the quality of play and competitiveness in both men's and women's but the addition of NIAC to our regular season schedule, as well as the opportunity to compete for a second conference championship, will do alot to enhance what our programs offer to basketball players and fans," added Willms.

Women's Basketball head coach Joe Di Curzio shared his excitement for the news; "These schools (NIAC) really value their basketball teams and the whole community turns out to support them. The games will be a fantastic atmosphere for our players and our home fans as well will be excited to get a chance to watch these teams when they visit us for our home games."

The NIAC season will begin for the Blazers on Remembrance Day weekend when they travel to Minneapolis to tip-off in a weekend series with the AFBLS Conquerors. Home opening weekend for the U.S. Conference is scheduled November 18-19 when CMU hosts the Cankdeska Community College Wolves from Fort Toten, North Dakota at the Loewen Athletic Centre.

"I believe that the extra competition that NIAC provides us will help us continue to establish our programs at CMU", added Men's Basketball head coach Billy Isaac. Both Isaac and Di Curzio are entering their fourth seasons with their respective teams and both programs have seen a spike in interest from local high school players as awareness grows that CMU Basketball will be expanding to join forces with a conference south of the border.

The entire CMU schedule will be publicly released in the coming days. The Blazers are scheduled to open their MCAC season on October 21st when they host the Providence Pilots and will be travelling into Alberta, October 6, 7 and 8 to play the Briercrest Clippers, Ambrose Lions and a team yet to be determined as part of their annual Alberta Collegiate Conference tour.