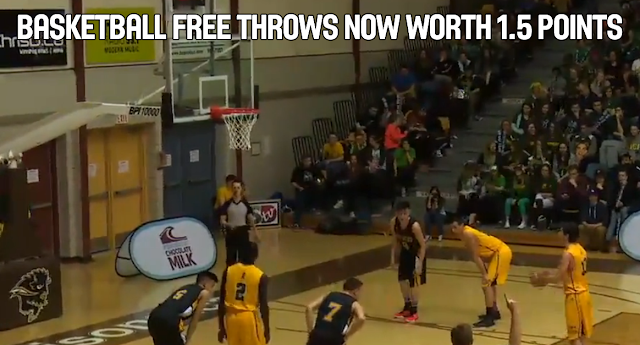 Basketball Manitoba today announced a new rule which will see a change in way points are scored in a basketball game.  Effective April 1, 2016, all 'free throws' made in a basketball game will now be worth one and half points.  This is a change to the traditional one point that a made free throw was awarded up until now and has been made to reward the shot at the same time penalize poor defense by 50% more.   This will also make a significant change to the number of teams out there trying the 'Hack-A-Shaq' strategy by making that even more of a defensive risk.  The change will also see the need for all scoreboards in Manitoba be upgraded to accommodate the new 'half point'.

Basketball Manitoba's executive director Adam Wedlake commented, "This new half point for all free throws will make the art of the free throw more important to the game and thus reward those even more who are an effective shooter.  I'm looking forward to seeing the first three and a half point play!  And in speaking with the scoreboard manufacturers, they too are ecstatic with the change!"

The new style of scoreboards with a half point in the score that will be used in Manitoba is illustrated below. 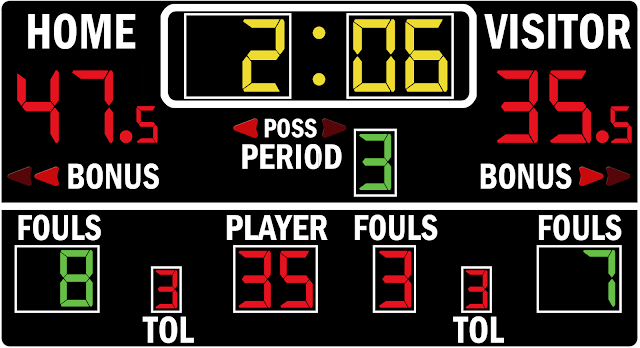 The new rule will still see two free throws awarded to a player fouled in the act of shooting, seeing the potential of 3 points scored.  Three shots for those fouled behind the 3-point line will be awarded and could see a potential 4.5 points scored if a player is successful on all three free throws.

With the change to the value the free throw now higher, Basketball Manitoba is setting up a number of special week-long, full day Free Throw Shooting Camps later this spring to take advantage of the new rule.

The change will be introduced to all levels of basketball in Manitoba effective April 1, 2016.  The recommendations came from consulting firm Yad, Sloof and Lirpa, who oversaw the entire rule review process on Basketball Manitoba's behalf.

This modification joins a number of other changes to the rules announced in previous years.

2 comments so far,Add yours