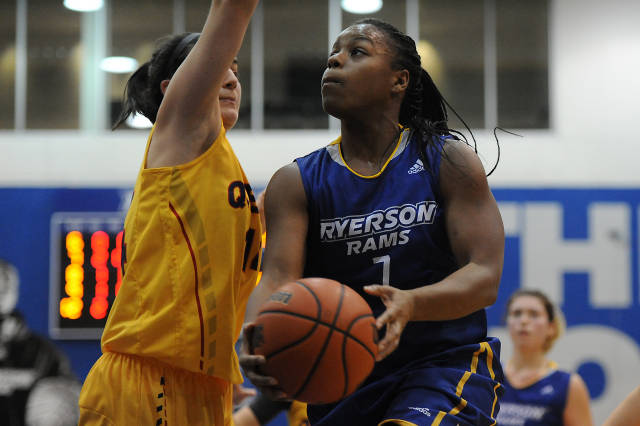 Pingue-Giles, a master’s student from Winnipeg, not only became the first Nan Copp Award winner in school history, she is also the first Ryerson female in any sport to be selected as CIS MVP.

Other CIS award recipients announced during the All-Canadian Celebration held at The Playhouse in Fredericton were Saint Mary’s guard Kennisha-Shanice Luberisse, who was named the defensive player of the year; Alberta forward Brooklyn Legault, who captured the Kathy Shields Award as the top rookie; McGill bench boss Ryan Thorne, who earned the Peter Ennis Award as TIMEX coach of the year; Dalhousie forward Ainsley MacIntyre, who merited the Sylvia Sweeney Award which recognizes excellence in basketball, academics and community service; as well as Ottawa guard Krista Van Slingerland, who was presented with the Tracy MacLeod Award for her determination and perseverance.

The ArcelorMittal Dofasco CIS championship gets under way Thursday at the University of New Brunswick’s Richard J. Currie Center and culminates Sunday at 1 p.m. Atlantic Time (12 noon Eastern) with the national final, live on Sportsnet 360. Saturday’s semifinals are live on Sportsnet ONE (12 noon & 2:30 p.m. Atlantic) and all 11 games from the eight-team tournament will also be streamed on www.CIS-SIC.tv.

Pingue-Giles was so dominant at both ends of the court in her final university season, she was also voted the OUA defensive player of the year. The 5-foot-7 guard finished second in the Ontario conference and seventh in the country in scoring with 17.6 points per game, ranked first in the nation in steals (4.2 spg), and was fifth in the OUA in assists (4.1 apg). The most utilized player on the Ryerson roster with 29.5 minutes per contest, she also contributed 6.8 rebounds per outing, good for third on the team.

Her stellar play helped the Rams top the OUA East standings for the second straight campaign with a 16-3 record and take second place in the OUA RPI ratings. A year removed from making their first appearance at the CIS Final Eight, Pingue-Giles and the Rams were ranked no lower than fifth in the nation for the duration of the 2015-16 season.

For her career, Pingue-Giles, criminology graduate and current master’s of public policy and administration student, sits third on the all-time Ryerson list in both scoring and assists, fifth in rebounds, and second in steals.

“Keneca has been a trailblazer during her time at Ryerson. In addition to her relentless competitiveness being a major part of establishing our program as a national contender, individually she has improved every year and this is a testament to what can be accomplished with dedication, drive and passion,” said head coach Carly Clarke. “As the first Ryerson female student-athlete to be recognized with this award, I am incredibly proud of the impact she has had and the legacy she will leave with our women’s basketball program, Ryerson athletics, and our university as a whole.”

The other nominees were guard Paloma Anderson of Acadia, forward Jessica Lubin of UQAM and guard Laura Dally of Saskatchewan.

The all-Canadian teams were also announced on Wednesday.

Joining CIS MVP Keneca Pingue-Giles of Ryerson on the first squad were forward Jessica Lubin of UQAM (15.3 points per game), as well as guards Paloma Anderson of Acadia (18.7 ppg), Laura Dally of Saskatchewan (17.2 ppg) and Danielle Boiago of McMaster (17.4 ppg).

The second unit is comprised of guard Jessilyn Fairbanks of Alberta along with four forwards, including Kayli Sartori of Fraser Valley, Alex Kiss-Rusk of McGill, Alison Keough of Cape Breton and Charlotte Kot of Regina.

It marked the first career selection for all members of the two all-Canadian teams.

In addition to CIS top freshman Brooklyn Legault of Alberta, the national all-rookie squad is made up of forward Julia Curran of Western, as well as guards Kaylee Anagnostopoulos of Windsor, Gladys Hakizimana of McGill and Maria Mongomo of UNBC.