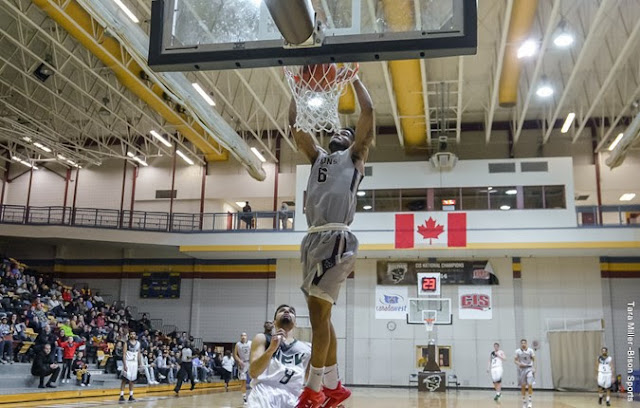 The #9 nationally ranked University of Manitoba Bisons hosted the second game of their Canada West men's basketball quarter-finals series against the University of Fraser Valley Cascades on Friday, March 4, at Investors Group Athletic Centre. The game was closer than the first of their series, with Fraser Valley taking an early lead but failing to hold back the home team who rallied to a 77-72 victory in overtime.

The win marks the first playoff series sweep for the Bisons since they joined Canada West in 1999-00 season, and their first series win since 2001. With this win, Manitoba will join three other Canada West teams for the final four on March 11.

It was a high-speed game, which worked well for the Bisons as they racked up multiple dunks and kept the visiting Cascades on their heels for much of the game. A late rally by Fraser Valley against a cautious Manitoba team brought the game to overtime, but the home team—led by guard Justus Alleyn—regained the lead and kept it for a big win.

"Late in the game we got some really key defensive stops," said Bisons head coach Kirby Schepp. "They couldn't get great looks because our guys really played solid D down the stretch."


The first quarter saw the home team jump to an early lead before Fraser Valley—led by guard Vijay Dhillon—rallied to tie the game at 9 with four minutes left. Dhillon scored two three-pointers near the end of the quarter, while Manitoba's Alleyn scored a three-point buzzer-beater. The Cascades ended the first quarter up 23-18.

Manitoba's intensity picked up in the second quarter, opening with Alleyn making a line drive for a big dunk. Manitoba's Ilarion Bonhomme scored a wide-open three, followed by a jump shot by forward Wyatt Anders to tie the game at 34. The quarter ended like it started, with a thunderous dunk—this time by Manitoba's Brett Jewell. Manitoba was up 38-34 at the half.

Bisons guard Amarjit Basi kicked off the second half with a three-point shot to give Manitoba a 7-point lead. While Fraser Valley guard Kevon Parchment netted a three and multiple jump shots, his team was unable to close the gap and ended the third quarter down 57-48.

Fraser Valley made their best effort in the fourth quarter, led by consistent shooting from forward Nate Brown. They managed to close the gap, finding themselves down 64-62 with one minute left in the game. After a travel call against the home team, Fraser Valley had 21 seconds to win or tie the game. A jump shot by Parchment tied up the game with five seconds left, and Manitoba was unable to score—bringing the game to overtime.

"We were playing not to lose," said Coach Schepp of the slip into overtime. "The guys just didn't want to make a mistake, instead of attacking aggressively as we did earlier in the game."

Both teams struggled to put points on the board in overtime, going nearly two minutes without scoring. Alleyn sank two free-throws to break the tie with three minutes left, followed by a three from forward Keith Omoerah. Fraser Valley kept it close with Brown draining free throws and Parchment scoring a clutch jump shot, making it 73-72 for Manitoba with 35 seconds left. A three by Bonhomme brought the home crowd to their feet and increased the lead to four. With 16 seconds left, there was not enough time for the Cascades to make up the difference.

The Bisons won 77-72, moving past the quarter-finals and onto the Canada West Final Four against opponents that are yet to be determined. The final four will take place next weekend, starting on March 11.