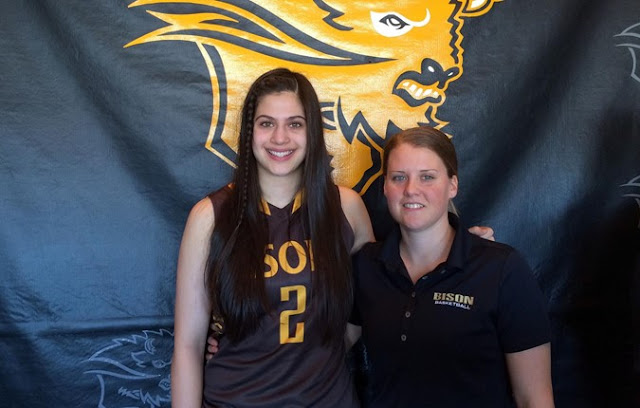 Bison head coach Michele Hynes has announced the commitment of forward Lana Mackic (pictured with coach) and guard Taylor Randall to the Bisons for the upcoming 2016-17 season.

"I am extremely excited to announce the addition of Lana to our program. She is a product of great local coaches who have guided her development to this point. She is an extremely motivated student-athlete and will excel both on the court and in the classroom," said Hynes. "We are extremely excited about the addition of Taylor to our Bison program. She brings a unique level of experience and success to our team coming from Ontario. Her work ethic and commitment to defense will compliment our current group of athletes very well."

Mackic, 17 (turning 18 in March 2016), finishes her high school career at Miles Macdonell Collegiate. The 6'0" forward has averaged in her grade 12 season with 25.3 points per game, 13.3 rebounds per game and 2.5 steals per game in 2015-16. In addition, the Winnipeg native playing resume includes Manitoba High School Athletic Association (MHSAA) Athlete of the Week in grade 11 and 12; All-Star in the in the Garden City, Pembina Trails, Sisler, St. Vital and Miles Macdonell varsity basketball tournaments in 2014-2015; All-Star in the Miles Macdonell Varsity Tournament in 2013 and number five in the Winnipeg Free Press top ten Manitoba Players in grade 11. In addition, she has played provincial teams (15U, 16U, 17U) from 2012-2015 and won silver with 17U team at nationals in 2015. Mackic has been part of the Honor roll from grade 10-12.


Randall, 18, completes her high school career with St. Mary Crusaders in Hamilton. The 5'9" guard has been captain of St. Mary's in grade 11 and 12 while part of the program that has been four-time OFSAA (Ontario Federation of School Athletic Associations) champion, three-time city champion, four-time GHAC (Golden Horseshoe Athletic Conference) champions and three-time OBA (Ontario Basketball Association) champion. In addition, the Hamilton native playing resume includes MVP of the Ryerson Rams Shoot for the Cure tournament plus she has been an Honour roll student. 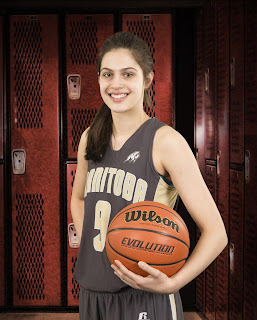