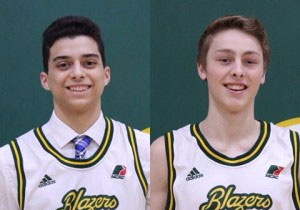 The CMU Men's Basketball program has announced the commitment of two members of the semifinal FRC winners have signed letters of intent to join the Blazers for the 2016-17 season: 6'3 forwards Nick Bueno and Jaden Harms.

After missing out on the provincials entirely in 2015, the Centurions soared to an 87-84 win over the #4 ranked Sisler Spartans in the Provincial quarterfinals. A quick glance at the final update of the Manitoba High School Athletics Association 'AAAA' Boys Basketball ranking highlights just how high the Centurions are flying. On February 23rd, Fort Richmond went from not being ranked in the top ten (NR) to #9. They then began the provincials last weekend as the #5 team: a testament to the chemistry and confidence that Bueno and Harms and the Centurions are having. Head coach Ogo Okwumabua has made a big difference for Fort Richmond, who has been absent from the program for the past nine years and was in fact was last head coach to propel the Centurions into deep provincial playoff run.

A member of the Winnipeg Wolves club program, Bueno has had a great first season with the Centurions this year. The 6'3 forward transfered to the South Winnipeg high school for his grade 12 year primarily for the opportunity to play more in the position that he felt most comfortable. His former team, the St. Paul Crusaders are ranked #2 by the MHSAA and along with John Taylor, Garden City and FRC, make up the 2016 'AAAA' Boys Basketball Final Four.

"I think that Nick's biggest asset is his tenacity," said CMU head coach Billy Isaac, "He is a solid player and I'm looking forward to seeing him develop even further on the floor with us next season."

Bueno averaged 11 points and 7.5 rebounds in his grade 12 season with the Centurions, showing himself to be a productive scorer, with a field goal percentage of 41% from the floor and 32% from beyond the arc.

Accompanying Bueno is 6'3 forward Jaden Harms who had a big night in Saturday's quarterfinal victory, shooting 9 of 12 from the field for 20 points. A graduate of the Junior Bisons club basketball program, Harms has averaged 15.3 points per game in his grade 12 season and will be leaving quite a legacy at his high school.

Selected Male Athlete of the Year in his Grade 10 class, Harms was also selected Most Valuable Player of his Junior Varsity team that year and was a repeat selection for Team MVP last season with the varsity team in his grade 11 season.

"Jaden plays with a quiet tenacity," said Isaac, "he can attack the rim with power and he is able to use his size and speed to finish in most situations."

Harms and Bueno are in action this Saturday at the University of Manitoba's Investors Group Athletic Centre where they will take on the #1 ranked John Taylor Pipers in the 2016 MHSAA "AAAA" Boys Provincial Semifinals.