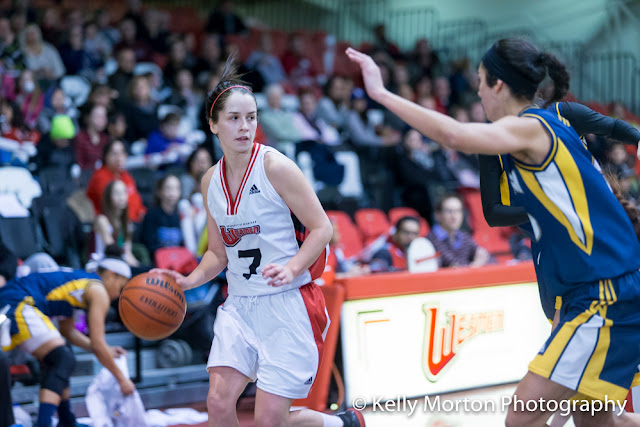 The University of Winnipeg Wesmen in conjunction with the Canada West Universities Athletics Association have announced that fourth year women’s basketball player Megan Noonan has been named the Canada West Female 1st Star of the Week, for the week ending January 10, 2016.

In a vital home and home series against their Provincial rivals, the Brandon University Bobcats Wesmen co-captain Megan Noonan was at her best.

The fourth year guard scored 57 points (28.5 ppg), drained seven-three pointers, and dished out 10 assists to go along with nine rebounds and eight steals in the two games.

In the opening game at Brandon last Thursday, Noonan scored 24 points in 39 minutes of playing time while adding six rebounds, four assists and five steals as the Wesmen fell short in a 88-76 decision to the Bobcats.

In Saturday’s 80-72 home court victory, Noonan was even better, scoring a game high 33 points, including five-three pointers and finished the contest with six assists and three steals in 38 minutes of playing time.

“I am very proud of where Megan is now as a 4th year player. She has continually elevated her play and the play of others around her from the fall leading into the New Year. She embraces her opportunities and understands the importance of her leadership. In our game this past Saturday, Megan knowing the importance of that game rose to another level to guide us to victory”, added Wesmen Women’s Basketball head coach Tanya McKay.

The Wesmen will have the bye this weekend and will be back in action on Friday, January 22nd at home against Victoria.