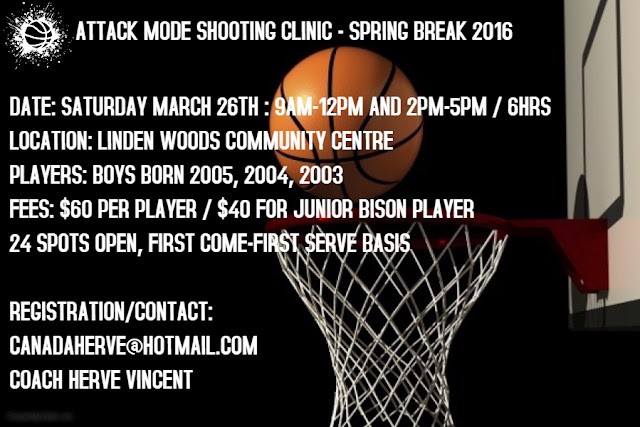 Coach Herve Vincent has announced that the next Attack Mode Basketball camp will be offered during Spring break on March 26th from 9:00 am - 12:00 pm and 2:00 pm - 5:00 pm (6 hour camp).  The 1-day camp is open to boys born in 2003 to 2005 at a cost of $60 each (a discount is offered to members of the Jr Bison program).  The camp offers quality training and fundamental teaching to the basketball players who want to learn and improve with the help of experienced coaching staff.

Vincent was born and raised in France, where his dedication to the game began in 1988 as a 10 year old beginner. He has been involved in coaching since 1997, initially as a volunteer until he became a certified coach in 2005. By this time he earned his degrees in sociology, education and sports training.

He has coached and trained players at all levels, from youth to adult, males and females, at both the city and national level for 18 years. He has experience in promoting basketball via presentations in schools, community centers, university, tournaments and skill camps. From 2006 to 2009, Vincent worked as a technical supervisor for the youth basketball development program in the SPO Rouen professional club, where he developed and implemented specific youth skills programs. He also developed the grassroots program "school of basketball" multiplying the number of players by 3 times in 3 years with the club. He was nominated head coach for 12U Boys selection at the provincial level in 2008 and 2009 in Normandy, France. 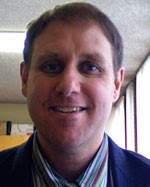 Coach Laping has been coaching basketball in the Province of Manitoba for over 20 years. He is currently the varsity boys coach at St Paul’s High school, where he has led the Crusaders to 4 provincial final fours and won 3 conference championships, producing 14 Canadian College or CIS players. He is also currently an assistant coach with the University of Manitoba Bisons and a Junior Bison Head coach. He is the former president of the Manitoba Basketball Coaches Association, has coached many Provincial teams, and with the Basketball Canada’s Centre for Performance. He was the 2009 winner of the AAAA boys coach of the year and, was awarded the Peter Dyck award for coaching excellence in 2010.