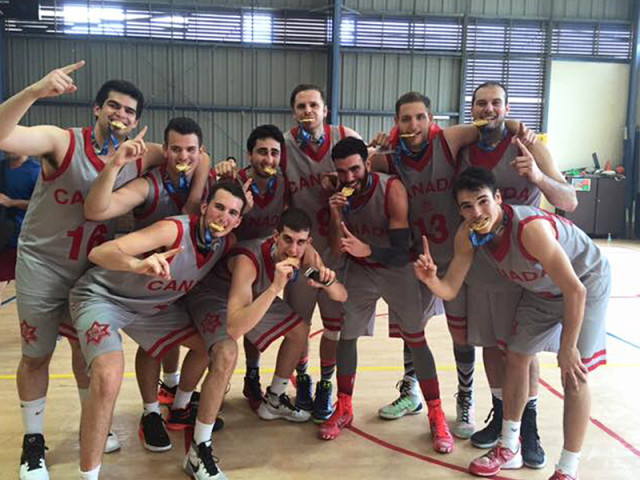 Just days after making history as the first Maccabi Canada open men's basketball team to beat the Americans, Canada beat them a second time to win the gold medal in a game Canada's head coach called "the craziest thing ever."

"We started off very slow. We were down about 20 points in the first quarter, but I told our guys, 'Just stay composed and just keep playing our game,'" said head coach Allon Bross, speaking to The CJN just hours after the Jan. 4 win at the Pan American Maccabi Games in Santiago, Chile, which began Dec. 26 and were scheduled to end Jan. 5.

He said that with less than one minute left in the game, the U.S. team was already celebrating their victory on the sidelines.

"And that is when the miracle began to happen," Bross said.

"Ave Bross, my son, hit three three-point shots within 40 seconds, the last one with just two seconds left on the clock to tie the game. That was the craziest thing ever," he said, adding that his team won 95-85 in overtime.

"They [the Americans] were shocked."

Tali Dubrovsky, Maccabi Canada's national executive director, said the U.S. basketball team traditionally dominates the competition, leaving the Canadians to compete for the silver or bronze, but with a win against the Americans early in the tournament, the Canadian team set its sights on the gold and did not disappoint.

"We had a lot of heroes. Ave was one – he scored 33 points in the game. Sage Usher, our other guard, was off the charts and he scored 27 points. We had our big guys rebound the ball. We had Adam Halpern, who must have had 18 to 20 rebounds, and all these things, all these battles that happened, resulted in us winning. Plus, we had a little bit of mazel. We needed some mazel to get this one," Bross said.

For the team's assistant coach Alex Brainis, this victory was especially sweet.

Brainis was a player on the 1997 Maccabi Canada open men's basketball team that won Canada's first and, until now, only gold medal in basketball, defeating Great Britain.

"And now he has won it as a coach, which will, for our sport in basketball, probably be a very unique statistic," Bross said.

In addition to the basketball team, Maccabi Canada was also represented by a masters tennis team, consisting of 44-year-old Anton Rabie and 40-year-old Lauren Liverman.