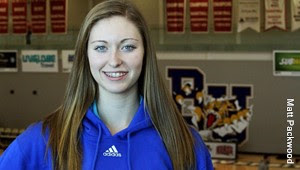 Weckend is already the second recruit to join the Bobcats for the 2016-2017 Canada West season after Adrianna Proulx of Thompson, Man. made her decision to join the program late last month.

"I believe that Kylie has the ability, work ethic and desire to become a strong contributor to our program," said Thomas. "Her perimeter skills are there and she is a fierce competitor who wants to excel. She can handle the ball, attack the basket and shoot from long range."

Weckend is from Indian Head, Saskatchewan and enters her grade 12 season with a strong high school sports resume as she makes final preparations to make the jump to the CIS level.

"After meeting coach Thomas and his team, I feel that the Bobcats will be a great fit for me because the team appears to be competitive, athletic and welcoming," said Weckend.

She has guided her club team to championship wins at multiple tournaments across Western Canada over the past four years and she also played on Saskatchewan's under-16 provincial team.

"I am proud and grateful to attend BU because it will allow me to reach and excel both my basketball and academic goals," added Weckend.