The Great Trophy Debate: Do We Need Participation Awards? 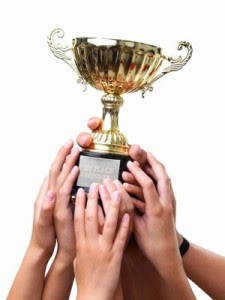 “Daddy, do we get trophies for playing lacrosse this spring?” my son asked me a few months back.

“No, you get to go out and run around and have lots of fun while learning lacrosse,” I said.

“OK!” Then he turned and ran out on the field for the start of his first practice.


According to some people, he should have stormed back to the car and refused to play. After all, there were no trophies being handed out. But he didn’t, because he just wanted to play.

Over the last few weeks, there has been a lot written on whether children should receive participation trophies for youth sports. The debate was ignited when Pittsburg Steelers star James Harrison very publicly returned his 6 and 8 year-old children’s participation awards, stating:

“While I am very proud of my boys for everything they do and will encourage them till the day I die, these trophies will be given back until they EARN a real trophy. I’m sorry I’m not sorry for believing that everything in life should be earned and I’m not about to raise two boys to be men by making them believe that they are entitled to something just because they tried their best.”

While Harrison is certainly not the model citizen for doling out positive parenting advice, nor is 8 and under sports the cauldron for developing men, his remarks did ignite a very relevant debate:Should youth sports organizations be providing players with trophies and medals simply for showing up?

On one side, proponents of participation awards stated that it was worth a few bucks to give kids a big smile, and that such awards did not cause long term damage or build entitlement in kids.
On the other side, much of the sports world chimed in stating that Harrison was right. They said simply giving out awards for showing up was tantamount to child abuse (according to reporter Jim Nance), as it does not teach kids about the real world, and promotes a warped sense of their own self-importance.

Even representatives of the multi-million dollar trophy maker industry chimed in, stating that entitlement predated participation awards. They agreed that it does not make sense to hand them out to 17 year olds, but when it comes to kids, JDS Industries Scott Sletton stated, “Is there anything wrong with giving a medal or a token that says, ‘Good job. You participated. You did something good.’ I don’t think there’s anything wrong with it.”

So where do I stand on this issue? Many people emailed me or posted questions on social media asking for my opinion. Are participation awards a good thing, or a bad thing? Is there anything wrong with handing them out?

Let me start with a bit of disclosure here by saying that the last youth soccer organization I ran did give out participation medals, and I gave very little thought to it. But over the last few years, I have given quite a bit of thought to the subject, and here is where I stand.

I am against participation trophies and medals, but not because I think they are causing irreparable harm to our children. I just think they are a misguided use of money by youth sports organizations.

Now I know that might anger some folks, but my reasoning for this goes beyond the whole entitlement debate, the anti-competitive debate, and the “let’s teach them about the real world” debate. Here are three reasons why I think we can do better than handing out participation awards at season’s end.

1) The premise behind the awards is a false one
Supporters of such trophies state that trophies motivate kids to play, yet research shows thatextrinsic motivation on its own can be harmful, not helpful. They also say that acknowledging a child’s effort and participation with an award is a good thing, but in reality that is not what happens. We do not reward kids for making it to all the practices and games. We do not reward them for making a great effort, or improving their skills. We reward them for having a parent capable of registering them for a sport. There is no required minimum commitment; as long as they show up on the last day when the awards are being doled out, they get one. It’s an award for being registered and nothing else, and after the initial excitement, it takes its place on a kid’s shelf collecting dust.

Ask most kids one year later what a participation award was for, and they probably could not tell you (if they could even find it). And if their decision to sign up depends solely upon getting a trophy at the end, that is a sign of a bigger problem. You should not have to promise your kids ice cream to make them eat dinner every night; once in a while its OK, but used every night the pros are outweighed by the cons. By the same token, you shouldn’t need a trophy to encourage them to play sports, just like you do not give them one to go play in the yard with their friends.

I do know coaches who purchase a few simple trophies and hand them out on a weekly basis to their young players to keep for the week based upon things like “hardest worker” and “best teammate” and “great sportsmanship.” I think this is great. Sure, if you are coaching 8 year olds, you are trying to make sure you catch every kid being good, so he or she gets acknowledged. But what you are acknowledging are important values to your team (and for life), things that are earned on the field, not at the registration table. These trophies actually mean something, and give kids something tangible to strive for in practice and games. Reward them for that!

2) This is a really poor use of scarce funds
When I think back on the thousands of dollars my organization spent on medals and trophies to award to the thousand or so kids who registered for a season of soccer, I now cringe. At the same time, our organization’s scholarship fund was tapped out, and we did not have enough dollars to go around. We turned kids away because we no longer had the $40 scholarship that might have allowed them to play. Yet this is about the same amount as it cost to provide a team with their participation awards.
I could have also used those dollars to better educate all our coaches, so that they could become better teachers, role models and mentors for our players. Dollars spent that way would have a lasting impact year after year.

If given the choice between giving a child access to sports and educating coaches, or giving everyone a participation award, is it even a question? The $2000-$3000 we spent every year on awards could have put dozens of kids on the field, and/or dozens of coaches through some quality coaching education, and I wish I had it to do over again. I know many organizations that face similar budget crunches, and I advise them to put every kid on the field with a great coach before you put a ribbon around his or her neck.

3) The more trophies we give out, the less each one means
If we are going to give out awards, then lets make them mean something. Winning the Heisman Trophy is not about the worth of that hunk of metal; it’s representative of everything and everyone that went into the development of a great athlete over the years. A trophy or a medal should be a symbol for something earned, not a token of appreciation. Let’s make awards mean something.
One place where many teams and organizations go wrong is that they only award MVP’s, instead of awarding what the team actually values. They have team values like hustle, grit, sportsmanship, accountability, perseverance, and such, and then they give out an MVP, which represents none of those things. If you want to give out more awards, and make them attainable by all players instead of simply the best one or two, then start defining and rewarding your values.This gives every player a role, and the opportunity to be rewarded for their contribution to the team’s success, even if they never get off the bench or are far from being a top player.
As Ashley Merryman, author of the amazing book Top Dog: The Science of Winning and Losingstated in a recent interview, “The benefit of competition isn’t actually winning. The benefit is improving. When you’re constantly giving a kid a trophy for everything they’re doing, you’re saying, ‘I don’t care about improvement. I don’t care that you’re learning from your mistakes. All we expect is that you’re always a winner.’

Merryman continued: “I like kids. I want them to be happy and do well. But I’d much rather have a 6-year-old cry because he didn’t get a medal than have a 26-year-old lose it because they realized they weren’t as special as they thought they were.”
Amen!

Its time for youth sports organizations to stop handing out awards because mom or dad was able to fill out a registration form and get them to the field most of the time.

It is not the best use of organizational funds, for these are dollars that could be spent on scholarships or coaching education.

They do not reward the values and mission most youth sports organizations are striving to teach.
And they do not help to create and maintain a positive and enjoyable developmental environment, which is far more likely to keep kids coming back for more than a trophy or medal, in my humble opinion.

For more from John O’Sullivan and the Changing the Game project, click here.