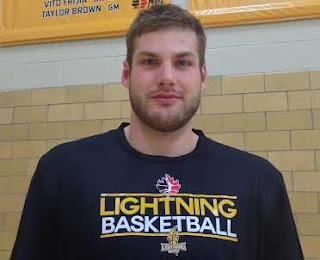 September 3, 2015 (LONDON, Ontario) – The London Lightning announced Thursday that Winnipeg native Chad Posthumus has been signed to the team.

“I am excited to bring him in,” said head coach Kyle Julius. “Chad has great character and the potential to be a great player in our league and a true leader for our team. The fans will appreciate Chad’s energy and toughness.  I’ve had a long relationship with Chad; I trust and respect him as a person and as a basketball player.”

In his first year of playing professionally, Posthumus, a 6’11” centre, has experience playing in Japan, Argentina and in the NBA Summer League for the Chicago Bulls. He also played three games for the Mississauga Power last season, averaging 24 points and 15 rebounds per game.

Collegiately, Posthumus played at Morehead State in the Ohio Valley Conference and in 2013-2014 he was fourth in the NCAA for rebounding in only 23 minutes per game.

“I am very excited to become a part of the London Lightning family and I am looking forward to an excellent season here. The Lightning organization is the best in the NBL and the country,” said Posthumus.

Posthumus marks the first in a slew of new Canadian signings for the Lightning which are set to be announced in the coming days.

“I am really looking forward to working with Kyle, a coach I admire, and getting out into the London community.”