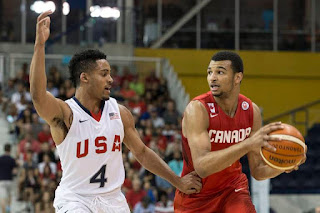 TORONTO, ON – The Canadian Men’s National Team has announced the 16 athletes, including 11 players from the NBA, who will attend training camp in Toronto, ON from August 14-20 in advance of the 2015 FIBA Americas Championship in Mexico City.

“We have a talented mix of NBA and pro athletes and we’re excited to get them in the gym together,” said Head Coach Jay Triano. “This camp will be an opportunity to train, build team chemistry and prepare for a tough and important tournament with the goal of qualifying for Rio.”

Tryouts and training camp will take place from August 14-20 at the Air Canada Centre. Full training camp roster and staff list below.

The team will participate in the 2015 FIBA Americas Championship in Mexico City, Mexico from August 31-September 12. The 1st and 2nd place teams will qualify for the Rio 2016 Olympics.

In advance of the FIBA Americas, Team Canada will head to Puerto Rico to participate in the Tuto Marchand 5-team exhibition tournament from August 23-26.