"Kristiann is an extremely gifted athlete who will be counted on to shut down the top players on other teams" explained head coach Joe Di Curzio, who is entering his third year with the Blazers and is looking forward to seeing Leighton on the court for his team.

Leighton averaged 9 points, 14 rebounds and 5 steals per game in her Grade 12 season and was recognized as a tournament all-star in tournaments hosted at Garden City, Vincent Massey, Sisler and Miles Macdonell in 2015. 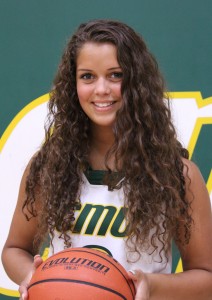 "Kristiann's rebounding skills are outstanding and along with her great team play and extensive experience on championship teams, we expect that she will become a big contributor for us on the court," added Di Curzio.

Leighton, her Wolves teammates, and the rest of the Blazers will begin their preseason home action on Friday, September 25th when they host the Briercrest Clippers of the Alberta Collegiate Athletic Conference at the Loewen Athletic Centre as Friday night's headline event at CMU's Fall Festival 2015.