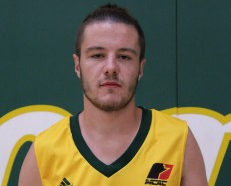 The CMU Men's Basketball Team is very happy to announce the commitment of Linden Christian's Andrew Davison for the 2015-16 season. The 6'1 guard led his Wings to the Zone 12 Championship on way to the the 2015 MHSAA 'AAA' Boys Provincial Championships that Linden Christian won last March.


"Andrew is a hard working player that has always put his team success first", head coach Billy Isaac commented, "He has a very high basketball IQ and work ethic."

Davison led the Wings in steals and assists in his grade 12 season and was also productive offensively, adding 9 points per game and 5 rebounds. His complete game and floor leadership led to Davison being recognized by his teammates as Linden Christian's Most Valuable Player in 2015.

"I am looking forward to watching him develop during the coming season and in future years", Isaac added.

A multi-sport athlete, Davison captained the Linden Christian soccer team this spring and as a defensive back on the Southwest Wolves football team was selected to the 2014 All-star game.

Davison and the Blazers begin their 2015 preseason on September 25th when they host the Briercrest Clippers of the Alberta Colleges Athletic Conference as the headline event of opening night of CMU's 2015 Fall Festival.