Canadian Women Take Gold Over USA at Pan Am Games 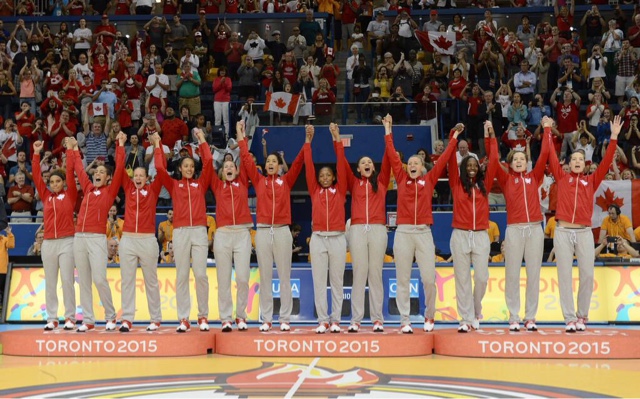 "It’s a dream come true for these women and for our team. We finally had the opportunity to be the home team and win a gold medal on home-soil," said Head Coach Lisa Thomaidis.

Hamilton, Ontario native, Kia Nurse  finished the game with 33 points on 10-17 shooting to go along with six rebounds, three assists and two steals. Natalie Achonwa  helped the cause with 13 points of her own. USA’s Breanna Stewart finished with 17 points while shooting 45% from the field. For a full box score,click here .

The Pan Am Final was close out of the gate as Canada trailed the USA 10-9 midway through the first quarter. Nurse showed championship savvy in the first frame by scoring five points and corralling two rebounds. Later in the quarter, USA pulled away as they led Canada 23-13 going into the second.

Canada gained momentum in the second quarter as they outscored the Americans 23-13. High-powered offense by Nurse and poised open-court skills by Nirra Fields  led Canada to tie the game at 36, at the half. Nurse scored 12 points in the quarter together with two rebounds and two steals and Fields chipped in with seven points in the frame.

The Women’s National Team looked to create some separation between them and the Americans in the third quarter. Coming off of the bench, Achonwa made her presence felt in the quarter as she scored nine points and blocked a shot. While forcing five turnovers in the frame, Canada led the USA 62-51 going into the fourth.

Following the third quarter, Canada looked to close out the game strongly. After the Americans cut the lead to five points with less than four minutes left, Canada regained control of the game by hitting big shots down the stretch. Nineteen year-old guard, Nurse, hit two late-second free throws to seal the victory for Canada – 81-73.

“We’re so happy about this victory,” said an emotional Lizanne Murphy . “This has to be one of the best days of my life. We wanted this win so badly.”