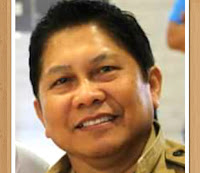 Congratulations go out to Winnipeg's Manny Aranez who has been recently elected as the new Commissioner of the Filipino Basketball Association of North America.  He will now oversee all basketball operations during the annual September Long Intercity Tournaments.  The 3 year term will allow Manny to work on more program expansions throughout North America.   Manny is currently the basketball commissioner with PBA Winnipeg.

Manny commented, "Its quite an honour to represent Winnipeg, Manitoba at this prestigious event. They have so much respect for the Winnipeg delegation and that is because of the good programs offered in our province.  This year, we are representing the tournament at all age divisions in Chicago and I would like to thank all of our dedicated volunteers and City Directors of which without them, it will be impossible for me to do this.  This includes Muriel Masangkay, Randy Viray, Ron Balingit and Arsenio dela Cruz along with the rest of the PBA committee."