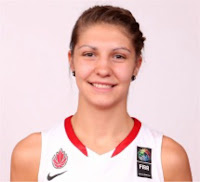 (Toronto, ON) – Canada Basketball’s Development Women’s National Team has taken the first step in their 2015 competitive season. The program has announced the 22 athletes, including Manitoba's Emily Potter, who have been invited to the June 6-9 tryout by invitation to represent Canada at the FISU games in Gwangiu, South Korea. The tryouts and camp will take place at the University of Toronto’s Goldring Centre.

Emily is coming off an ACL knee injury sustained last fall while at the University of Utah which forced her to miss her sophomore year with the Utes.

Emily commented, "Being back to me means everything. I have been looking forward to this for 8 months since the day I got injured, and I am so happy for the opportunity to tryout for the national development team this summer."


Fabian McKenzie returns as the head coach of the Development Women’s National Team.

“This is going to be a highly-competitive training camp. There is an incredible amount of talent in this group and I’m excited to see how it all comes together as we prepare for the FISU games,” said McKenzie.

After the tryout period, the Development Women’s National Team will take part in a training camp at the Goldring Centre from June 10-19. Ahead of the FISU games, the squad is participating in a Chinese exhibition tournament from June 22-28.

The team will then compete in the FISU games, an international competition that brings together student-athletes from around the world. The women’s basketball competition runs July 5-13.

Athletes Invited to Tryout by Invitation