UPDATED: The Junior Bison Boys Basketball Club have announced the details on their upcoming open basketball tryouts for the 2015-16 season.  The tryouts will run 8-11 at the University of Manitoba and Lindenwoods Community Centre for boys born 1998 to 2006.  Details are...

General inquiries on the Junior Bison Boys Basketball Club can be made to juniorbisonboysbasketball@gmail.com


NEW FOR 2015-16: The Junior Bison Boys Basketball program is recruiting boys born in 2006 and 2005 for his grass roots program for the 2015-2016 season. The skills-development based training program will run from September 2015 to June 2016 with one practice a week for about 35 weeks. Players will compete in local tournaments as well as in Grand Forks. Try-outs are August 8th-9th at the University of Manitoba. If you're interested in the 2005-2006 age program and in learning the game of basketball, please contact head coach Scott Anderson at:  scott.anderson@hubinternational.com. Full try-outs schedule is below and available at: http://www.juniorbisonboys.ca/ 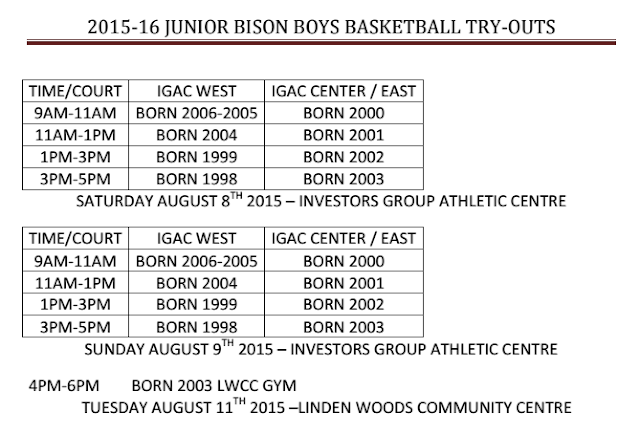 More information on the club can be found on their website at http://www.juniorbisonboys.ca/