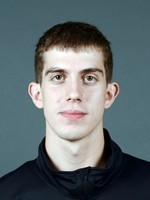 The University of Manitoba Men's Basketball Program has announced the announce the achievement of 3rd Year player Keenan Bennaroch as he will represent Canada for the Pan American Maccabiah Games this winter.  As the only player selected from Western Canada Keenan will represent the Bisons as well as the Canada West conference on a Global Stage.

Former Bisons participating in basketball in previous Maccabiah games include Hymie Fox and Zak Hirshman as well as Manitobans Dan Becker and Cliff Umans. After playing two successful seasons in the MCAC and earning league MVP in his final year, Keenan transferred to the University of Manitoba as a red-shirt for the 2014-2015 season. He will look to build off this experience for the upcoming season.

In a statement about being selected to the team Bennaroch stated: "I am thrilled and honored to have made the team. It is a great opportunity to play against other Jewish players at an international level."

Head Coach Kirby Schepp "We would like to congratulate Keenan on this amazing accomplishment. His commitment and work ethic this past year have been outstanding and it has really paid off with this opportunity to represent Canada."

The Games will take place in Santiago, Chile and will run from December 28th – January 4th.