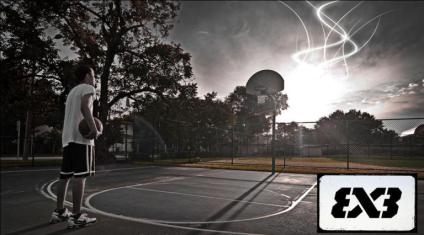 Three on three (3×3 or 3 on 3) basketball, often referred to as “street ball” or “not real basketball”, is without question the future of the sport. With on-again-off-again talk of adding it to the Olympic roster of sports (FIBA has been unsuccessful thus far for Rio 2016), leagues like 3×3 planet (3x3planet.com), and national representation like Canada’s U18 Men’s and Women’s National Teams (http://www.basketball.ca/3×3-s15148), undoubtedly the sport has merit, validity and a future. Many of us, including myself, grew up on the game, playing 3×3 at neighbourhood YMCA’s, parks and driveways. Most if not all of the players from my small hometown that went on to a post-secondary career in basketball, spent hours playing this style. So if everybody’s doing it, and has been for years, should your kids?

3×3 basketball is likely the best game for the development of young players. The idea of reducing the number of players on the field or court is nothing new. Popularized sports like Rugby 7s and 2×2 Beach Volleyball are good examples. In terms of youth sports, again, this is not a novel concept. Sports like soccer progress from 4×4 to 7×7 to 11×11 in all Canadian soccer leagues. So why should young basketball players be playing 5×5 for their entire career? Why in basketball do we largely modify the game for younger players by lowering the net, playing with a smaller ball and imposing rules like no zone defense or no full court pressure? In a study done by Fenoglio (2005), he states that “the optimal game for development is the smallest possible game that does not lose the game’s fidelity”. 3×3 basketball does not compromise the game in any significant way. It allows for all the technical skills (dribbling, passing, defense) and tactical skills (on- and off-ball screens, traps, give and gos), while eliminating the issues of zone defense, full court pressure and positions for developing players. There are many reasons why 3×3 basketball is the optimal game for development, and they will be addressed later on in this article, but let’s make the need more explicit.

I think we all know why kids participate in sports. They are fun, provide exercise, create challenges, foster skill development and cultivate friendships. But why do kids drop out? And why aren’t we more upset that kids are dropping out? There are many reasons for the drop out rate in sports. Many kids list injury, lack of skill or confidence in their skill, lack of improvement, issues with coaches and officials, and an overall lack of enjoyment as their primary reasons. Many of the reasons for decreased involvement could arguably be attributed to the 5×5 model of development and competition.  3×3, on the other hand, offers increased involvement, better practice opportunities, higher cognitive involvement, and increased independence.

By decreasing the number of players on the court, 3×3 by nature increases player involvement. Each player gets more ball contacts and more opportunity to be involved in the offense. The more players touch the ball and get involved in the play, the higher the enjoyment levels. Not only does this result in kids having fun, but also provides greater opportunity for improvement. The more often each player receives the ball, the more opportunity there is for learning to occur. More interactions with teammates, opponents and the basketball result in more fun for kids. There is also simply more playing time for each player as there is often one to no substitutes. Depending on the organization of play and size of the court, there can be up to 24 players playing at one time. The result is more players competing at one time and less players on the sidelines.

We have already touched on the value of both block and variable practice. To refresh, block practice refers to the progression of simple to complex instruction by focusing on perfecting technical skills with a high level of coach feedback. Random practice refers to small-sided games that focus on decision making skills in conjunction with technique. There is often a decreased reliance on coach feedback, as players receive feedback from their interactions. For more information, check out an early blog post here: http://stevenashyb.wordpress.com/2014/06/25/principle-of-specificity-versus-random-and-variable-practice/ . 3×3 is considered variable practice as it allows for decision-based practice. Players are challenged to incorporate the skills  into an environment that is reactive and receive feedback from the perceived success of those decisions.

This creates more self-sufficient players as they become better at interpreting feedback from game situations and less reliant on coaches input. While block practice often results in better short-term improvements, a disproportionate number of those skills are transferred to game scenarios, with the player often reverting back to old habits. The practicing of skills in a 3×3 format will result in better long-term development and more consistent performance overall.

This was touched on above while discussing the style of practice. This relates to the goals of training, whether we are attempting to train a behaviour or make a decision. Block practice, as previously established, trains for a behaviour. This means that players are able to focus on personal technique. While there is a time and place for this, the result is often less thoughtful movements. Players are not required to focus on any other stimuli, simply the performance of a specific skill or pattern of skills. When we train for making decisions, as is common in 3×3, we witness more thoughtful decisions. Players must focus on the performance of technical skills and patterns, while reacting to their surroundings. Increasing the mental and physical effort, increases the reward. Not only will kids be thinking more, they’ll be having more fun doing it.

Once again, this topic was touched on when speaking to all of the above. By increasing involvement and creating opportunities to make decisions, there is an increase in self-efficacy. Players begin to feel more confident in their playing ability because they’ve received more playing style practice. They have been able to interact with the ball, teammates and opponents more often then in 5×5. They have less interactions with coaches, decreasing their reliance on external feedback. 3×3 games should be refereed by coaches with younger age groups, but as the players gain a better understanding of game tactics and rules, they will begin to self-referee. Moving towards an “on-your-honour” system of officiating, will in turn create more autonomous players. It will also offer players the opportunity to practice conflict-resolution and self-advocacy, two skills that are lacking practice due to increased supervision and the world of “helicopter” parents.

Overall, 3×3 is a better model for developing young players. In no way am I saying it should be the only model. Block style practice and 5×5 competition have their place as well; Young players should be offered a variety of opportunities. But 3×3 basketball, offers the smallest number of players without compromising the game of basketball. Players are still able to exhibit all the fundamental skills and are as active if not more than 5×5. They have higher opportunities for improvement due to increased playing time and number of interactions. It offers appropriate challenges for the age group, creates opportunity for autonomous decisions and conflict resolution, and decreases reliance on coach feedback. 3×3 isn’t a new concept, it is the future of the sport. There is a reason people have been playing it for years. It’s fun! It is also extremely valuable in the development of skill and the sport of basketball.

Information for this article was gathered from the following sources:

SNYB programming was developed in conjunction with the 3×3 model with progression in the later years to 4×4.