New Four Point Line Added to All Levels of Basketball 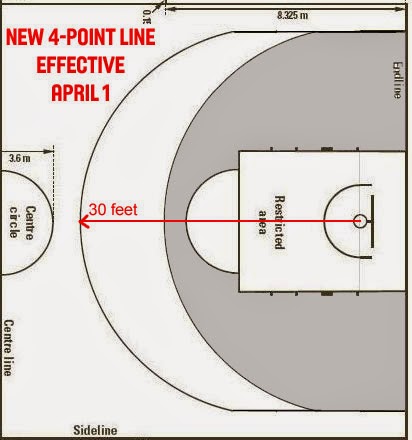 Basketball Manitoba is pleased to announce a new change to the official floor markings at all levels of basketball which will now include an new '4-point line'.  The new line will be marked at 30 feet from the rim and will take effect on April 1, 2014.   The existing 3-point line will still be utilized and in effect.

The original concept of the 3-point line began in the old ABA in the late 60's and was adopted by the NBA once the 2 leagues merged in 1979.  There hasn't been a change to the points awarded for a long range shot since then.

"This is a great move for basketball in Manitoba!  This will completely change how the game is played and rewards the player who can hit that smart shot.  I'm looking forward to seeing the first 5-point play later this year! We can't wait to get our young athletes shooting from that distance with a number of '4-Point Shooting Camps' we have scheduled later this spring'.  I was however disappointed that the '5-point half court shot rule' was voted down by FIBA"

The change will be introduced to all levels of basketball in Manitoba affective April 1, 2014 and came from consulting firm Yad, Sloof and Lirpa who lobbied FIBA on Basketball Manitoba's behalf.

4 comments so far,Add yours