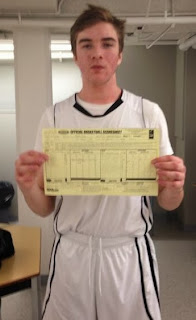 Manny Wood of St. John's Ravenscourt scored 83 points on Friday in a varsity basketball game at the Brandon Sun Spartans Invitational Tournament.  The feat broke the Manitoba record for most points scored in a game which hadn't been touched in 57 years.  The previous record for most points scored in a high school game in Manitoba came in 1956 when Alec Keenan rang up 82 points on January 23.

“It started like a regular game. I didn't really realize how many I had. I just kept shooting and they just kept going in,” Wood told North Pole Hoops. “I had a feeling I was going to have a good game, but I didn't except this.”

Manny, currently in grade 10 playing on the varsity team, led the SJR Eagles past the Beaver Brae Broncos of Kenora, ON 115-25.

Manny, a 6'4" forward from Winnipeg, was a member of the Bronze Medal winning 15U Manitoba Provincial Team this past summer.