PUBLISHED ON May 09, 2007 Headlines,
Basketball Manitoba, the Winnipeg Minor Basketball Association and the Manitoba High Schools Athletic Association jointly announced today that all levels of basketball played in the province will move to the FIBA, or international rule system effective the 2007-08 season.  This move affects all levels of basketball, including...
These levels join the Manitoba Provincial Team Program, Winnipeg Senior Women's Basketball League, CIS Women and CIS Men that have been playing under this system or have already announced this change to the new rule system.

The key rule differences between the NCAA rule system (presently followed by most levels of the game in the province) vs. the FIBA game are detailed in the chart below.  Highlights include...
The plan is for the games played at the Varsity level (grade 11-12) to run with 4 - 10 minute quarters with all levels younger playing 4 - 8 minute quarters.  Teams in the WMBA Community Club leagues will continue the 25 minute first half, 22 min second half running time scenario as is currently run in the community club leagues.  Teams in the WMBA Rising Stars League will run with the FIBA rules as the high school leagues will follow.  Junior High / Middle School leagues will follow the 4 - 8 minute quarter scenario.  Other leagues may also be slightly modifying game times / half times to fit their needs, but the actual on court rules will follow the FIBA model.  Details on such administrative modifications will be announced in the coming months.


Highlights of the key differences include...

Another significant change to the FIBA game sees a change to the actual lines on the court.  The changes include both the width and style of the free throw lane (from 12 feet wide at the baseline to 19.69 feet) and the distance of the 3-point line (from the current 19 feet 9 inches from the hoop to 20 feet 6 inches).  The shape of the  key itself will move from a rectangle shape to that of a 'trapezoid'.


There will be a gradual change to the new court markings in the schools over the coming years to adjust to these changes.  Below are two illustrations of the new and old court. 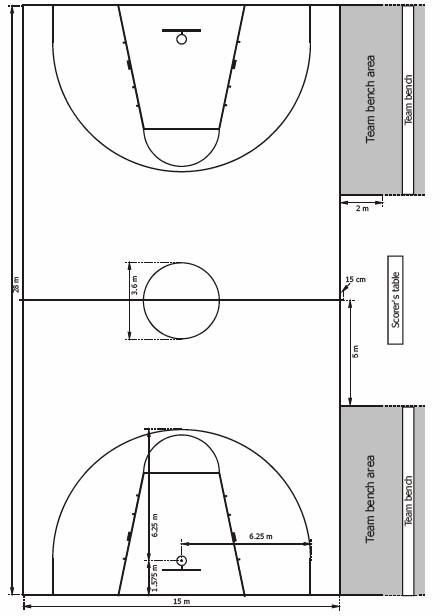 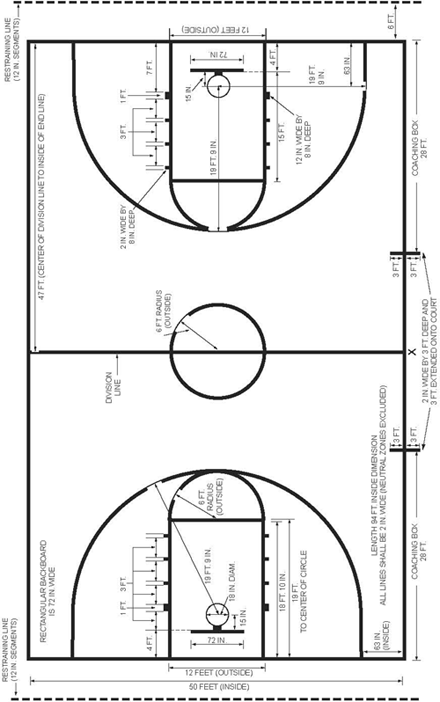