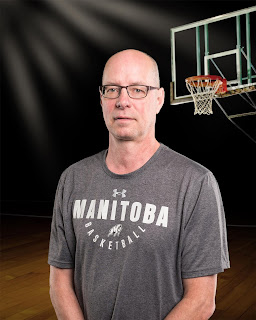 Scott Martin's playing career spanned five seasons at the University of Manitoba, where he competed with the Bisons in the CIAU (USports) and the Junior Bisons in the Manitoba Colleges Conference from 1982 to 1987. After graduating with honours, Martin landed at Tec Voc High School where he took over the Junior Varsity Boys program before moving to Sisler where his coaching success continued to blossom, winning numerous division championships, a 'AAAA' Provincial Championship in 2006 and earning the Manitoba Basketball Coaches Association 'AAAA' Boys Coach of the Year selection in 2000, 2006 and 2013.

Martin's drive to develop further in his coaching led him to the Manitoba Basketball Provincial Program from 1993 to 1997 where he led his home province to two silver medal finishes with the under-17 boys at Western Canadians and a 4th, 6th and a 7th place finish with the under-19 boys at Canadian National Championships. A lifetime basketball-educator, Martin returned to the Provincial Program in 2019 where he is working again with the roster of 17U boys.  He is currently the Head Coach of the Men's Basketball team at Canadian Mennonite University.