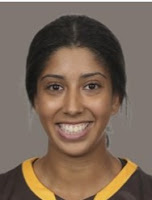 Claire Harvey is a graduate of Fort Richmond Collegiate, where she was a standout player for the Centurions’ basketball team for three years. During this time, she was also an active participant in the Manitoba Provincial Team Program. Claire went on to play for the University of Manitoba Bisons from 2013-2019, where she became a positive leader for her teammates and was named MVP in her senior year. Claire holds the record for all-time career blocks for the Bison’s, and she finished her career in the top 20 all-time for Canada West conference career blocks.

Since graduating from the U of M last year, Claire has continued to be involved in competitive basketball including competing in the first-ever Women’s’ 3x3 Canada Quest Championship and participating in the Filipino Basketball Association (FBA) league.

While playing for the Bison’s, Claire dedicated her time to coaching the next generation of basketball players. She coached in the Junior Bisons Basketball Program, spending two years as an assistant coach and three years as a head coach. Claire has also been a guest coach at many camps, including the Junior Bisons, Basketball Manitoba High-Performance Summer Camps and Prairie Elite Basketball Academy.

She was also involved with the 15U female team in 2019. Currently, Claire is a head coach for the Prairie Elite Basketball Academy 15U team, and an assistant for the 17U Targeted Athlete Program (TAP).